It is all very well putting names on family trees, but do they stack up, what is the evidence?

Following are records and images of James Ford’s birth from the Old Parochial Records and the certified document from the Scottish Archives.  James’ name is squeezed in at the end. 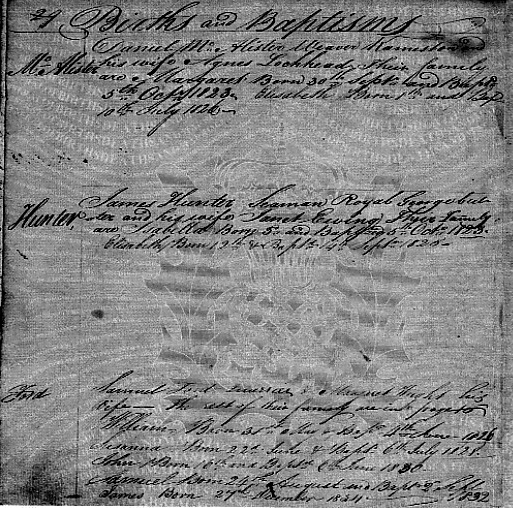 The ten children born to Samuel Ford and Margaret Wright are spread over two pages of the Old Parochial Records (OPR), five children on each page.

The OPR give more information that mere names and dates.  For instance we learn that Samuel Ford was a quarrier.  We may also note that despite the fact that ten children have been born that Samuel’s birth place has never been completed.  It is evident that the handwriting skills of the recorder, generally the parish priest, often makes the inscription difficult to decipher.  But it should be remembered such difficulties as writing and spelling confirm the authenticity of the record something which present-day government computer records cannot provide.

The OPR of James Ford birth showing the full page of entries.

Unfortunately I cannot trace the parents of Samuel Ford.  We can assume, following the traditional naming pattern, that his parents were probably named Robert and Mary but here the trail goes cold.

On the other hand we can trace the ancestors of Margaret Wright back to the mid 1600s.  Commencing with John Wright who married Janet Allen the follow OPRs confirm Margaret’s ancestry.